The City of Morgantown established a "Sister Cities" relationship with Xuzhou, Quanshan District, in China's Jiangsu Province in 2016, after holding a "Friendship City" status since 2012.

Xuzhou is in east central China, about 400 miles south of Beijing. The urban city has a population of about 3,400,000. Coal mining and higher education form part of the economic base of both Xuzhou and Morgantown, and the area is the birthplace of the Han culture in China.

Visitors from both cities traveled to their counterpart, and more cultural and economic exchanges are planned for the future. As these countries develop further ties in the global economy, the cities of Morgantown and Xuzhou, Quanshan District, can find new ways to add meaning to these global relations on a local level through cultural, economic, and educational exchanges. More than 200 Chinese students already attend West Virginia University, and Chinese language skills are offered in Monongalia County schools. It is hoped that Chinese residents in Morgantown will work with the Morgantown’s Sister Cities Commission (MSSC) to develop programs that highlight the importance of cross-cultural relationships for the benefit of the entire community. 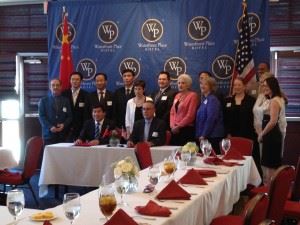 In 2012, delegates from Xuzhou visited Morgantown and signed the Friendship City Proclamation with its Chief and top advisors. A Xuzhou Delegation also visited in May of 2017.
Notify Me®
Agendas & Minutes
Pay a Bill
Trash & Recycling
Request Tracker
Maps
[]