This page serves as a hub for information related to the city's application for White Park to be entered into the West Virginia Department of Environmental Protection Voluntary Remediation Program. Below you will find useful information on the history of White Park and the city's plans for investing in the future of the park.

White Park serves as one of the City of Morgantown’s most important community assets. The 170-acre property is nestled in First Ward and used by residents from all of Morgantown and the surrounding areas. The five ballfields host dozens of little league and adult recreational softball teams throughout the year, and the basketball courts and ice rink provide opportunities for both general use and organized sports. Picnic areas provide casual respite and rentable pavilion host countless formal and informal events.

The land that now contains White Park was previously used as part of historically significant oil industry operations. At the turn of the 20th century, what was then known as the South Morgantown Tank Farm was rapidly expanded to support the production coming from these fields. The Eureka Pipeline Company, a subsidiary of Standard Oil, operated the farm between its creation in 1890 and its eventual retirement in the 1940’s and 1950’s. At its height, the farm likely stored more than two million barrels of oil in nearly 80 tanks. It stretched from Dorsey Avenue up to the back of the Morgantown Mall and covered around 700 acres. At the end of its operational life, a few of the tanks in the farm were used by the Morgantown Ordnance Works in its support of World War II.

This history has given White Park several things. The first is its name – an homage to I.C. White, whose 1927 obituary in the Morgantown Post tells us he was known as Morgantown’s “foremost citizen” while he was alive. The second is its unique geography. To help protect the environment, the tanks were surrounded by primary and secondary containment berms that largely remain intact today. These berms simultaneously form useful features for mountain biking and also have created diverse habitat for wetland plants and animals. The third thing this history has given White Park is its status as a brownfield.

White Park also houses Morgantown’s oldest and most extensive urban, off-road trail system. The nearly 17 miles of existing trails in White Park are used more heavily than any other BOPARC-managed trails, likely due to their proximity to residential areas and two centers of education. Although not all existing trails are formally sanctioned and maintained by BOPARC crews and volunteers, the entire trail system serves several important functions. Around 5 miles of learning loops and gravel trails provide direct neighborhood access to park amenities and serve as low-stress transportation corridors between neighborhoods.

Originally signed in the early 2010’s, the 3.4-mile Blue Diamond Race Loop is the pillar of local mountain biking within city limits. The 10-mile soft-surface trail system also provides a few areas for off-road biking “skill progression” where jumps, berms, and other bike features have been built and maintained by volunteers under agreement with BOPARC. This same system serves cross-country teams, the South Middle Bicycle Club, hikers, birders, and several other trail user groups.

Although beloved and heavily used, the White Park trail system has largely been developed from social and wildlife trails over the past century. Common to many east-coast parks, this type of informal development results in convoluted urban trail systems. A recent trail survey in White Park found more than 250 trail-to-trail intersections and dozens of trail-to-road intersections. The dense trail network and excessive number of intersections, combined with poor sightlines, narrow trail corridors, little signage, and minimal trail improvements, make for difficult navigation.

Recent complaints of unsanctioned trail construction and documented friction between different user groups have prompted BOPARC and the City to begin planning investments to better meet the needs of the community. Upgrades to other park amenities are also either planned or, in the case of the ice rink expansion and the new Southside Trail, have already been funded and are in the final stages of design. The City and BOPARC are excited to announce plans to expand recreational services at this important park.

Programs that help communities address brownfields have evolved significantly over time. As the community has requested expansion and upgrade of our recreational amenities in White Park, the City intends to take the lead on all future assessment and cleanup activities. The WVDEP’s Voluntary Remediation Program (VRP) and recently expanded federal and state grant dollars will provide the framework and funding for the City to proactively lead this effort in a public and expedited fashion. Although no state or federal regulatory agencies have indicated current, direct health hazards, White Park’s history warrants an assessment that will provide a comprehensive understanding of the landscape.

Our assessment activities in the VRP will be guided by our collective desired public uses for the park. This summer, we will begin a master trail design process for the entire park to better meet park user needs and desires, conserve the natural landscape, protect sensitive habitats, and highlight the rich industrial, ecological, and social history of the area through interpretive signage. Through our recent work preparing to build the Southside Trail, we have come to understand that trail construction itself can be a primary cleanup technique.

Benefits of the Master Trail Plan

The master trail design will help us formalize and build a trail system that accommodates all users while also preserving the ecosystem to support the environmental benefits of a forested landscape. The trail will be designed and constructed with proper oversight so that human health and the environment will be protected. There will be educational signs along the trail that will include historical and ecological information.

What is a Brownfield?

Brownfields are parcels of land with any history of previous use that hinders their current or future development. Any real – or, importantly, any perceived – contamination from previous uses might affect how we can responsibly use lands. The operation of an oil tank farm, despite the visible steps taken to limit the effects of any spill, has undoubtedly long affected the perception of White Park.

In the late 1980’s, the West Virginia Department of Environmental Protection (WVDEP) and the US Environmental Protection Agency (USEPA) formally recognized White Park as a brownfield after receiving citizen complaints at a few previous tank sites within White Park. Since then, in their assessment and associated cleanups of periodic complaints at specific tank sites, the WVDEP and the USEPA have worked directly with oil companies responsible for the previous use. This process has been piecemeal and reactionary in nature, limited to areas that were identified by complaints and with nearly no involvement of the City or BOPARC.

What is the Voluntary Remediation Program?

The WVDEP created the VRP in 1996 to encourage redevelopment of existing sites rather than development of pristine land. Going through the VRP will enable the city to do a complete assessment of White Park, clean up any identified contamination or areas of concern, and develop plans that will guide all future activity on the site. Completion of the program will ensure any clean up of White Park follows the latest state and federal health and environmental regulations, with activities led by Licensed Remediation Specialists overseen by the WVDEP.

You can learn more about the program on the WVDEP’s website.

Why is the City now taking the lead on cleanup efforts?

While Pennzoil/Quaker State, a subsidiary of Royal Dutch Shell, remains the chief responsible party due to its acquisition of the Eureka Pipeline Company and its liabilities, the City of Morgantown recognizes its role as the landowner. With updated regulations, new frameworks to conduct assessments and cleanups, increases in funding on the horizon, and a mandate from citizen requests to invest in White Park, we want to ensure this historical issue is dealt with in a comprehensive, cooperative, and timely manner. Entering the VRP now, as the primary applicant, will allow us to direct what happens to this immensely important recreational asset. Keeping decision-making power local will ensure that White Park’s future is based on our communal vision.

Discussions between Shell and the City of Morgantown are ongoing. Shell will be held accountable for any cleanup required at White Park that is associated with their inherited liabilities.

What is the cost?

The cost is still being determined, but the initial assessment is expected to be funded through a combination of grants and $50,000 of City funds that have already been allocated to the project.

What about the reservoir?

The drinking water reservoir in White Park was constructed in 1958 and has provided a portion of our source water ever since. Municipal drinking water is heavily processed and is monitored extensively for its potential to impact human health. The Morgantown Utility Board has decades of testing showing that the quality of the water sourced from the reservoir is some of the cleanest in the state. Testing of the reservoir has not indicated any contamination from the oil tanks. Unless future testing indicates potential contamination there are no immediate plans by the City to include the reservoir in the VRP process.

Are there any hazards to people currently using the park?

Over the past few decades, federal and state regulatory agencies have tested portions of the site for various contaminants of concern. Although these investigations did require certain, limited cleanup activities, nothing has been found that has prompted immediate enforcement action and modification of current uses.

It is important to note that previous assessments were judged against risk levels set for residential use. Since the most recent cleanup in 2010, new regulations have set recreational risk levels that account for the differences between these land uses and their associated risks. In short, there is nothing that has led us or any regulators to believe that excessive hazards currently exist.

What is the timeline?

The City anticipates entering the VRP in the Summer of 2022 and expects to complete the program within a three-year period. During that time, the City will develop and build a master trail plan for White Park that will expand and formalize the current trail system.

What about the Southside Trail?

The Southside Trail will be constructed within the next year along the southern boundary of the Cobun Reservoir. The trail is part of an agreement with MUB to expand the trail network in White Park following the installation of the raw water pipeline. The Southside Trail is a pilot for how trail construction serves to clean up a landscape with limited areas of contamination while enhancing recreational activities.

What about the rest of the old tank farm?

The City is being proactive with property that is within the jurisdiction of the City.

Should I be concerned that my house or property is within the boundary of the old tank farm?

The City of Morgantown will coordinate with WVDEP to hold workshops that will assist property owners in determining what steps they can take to determine potential contamination on their property. Once those workshops are scheduled they will be posted on this website and shared to those interested. You can sign-up to receive notifications for events and more from the city on our notify me page here. 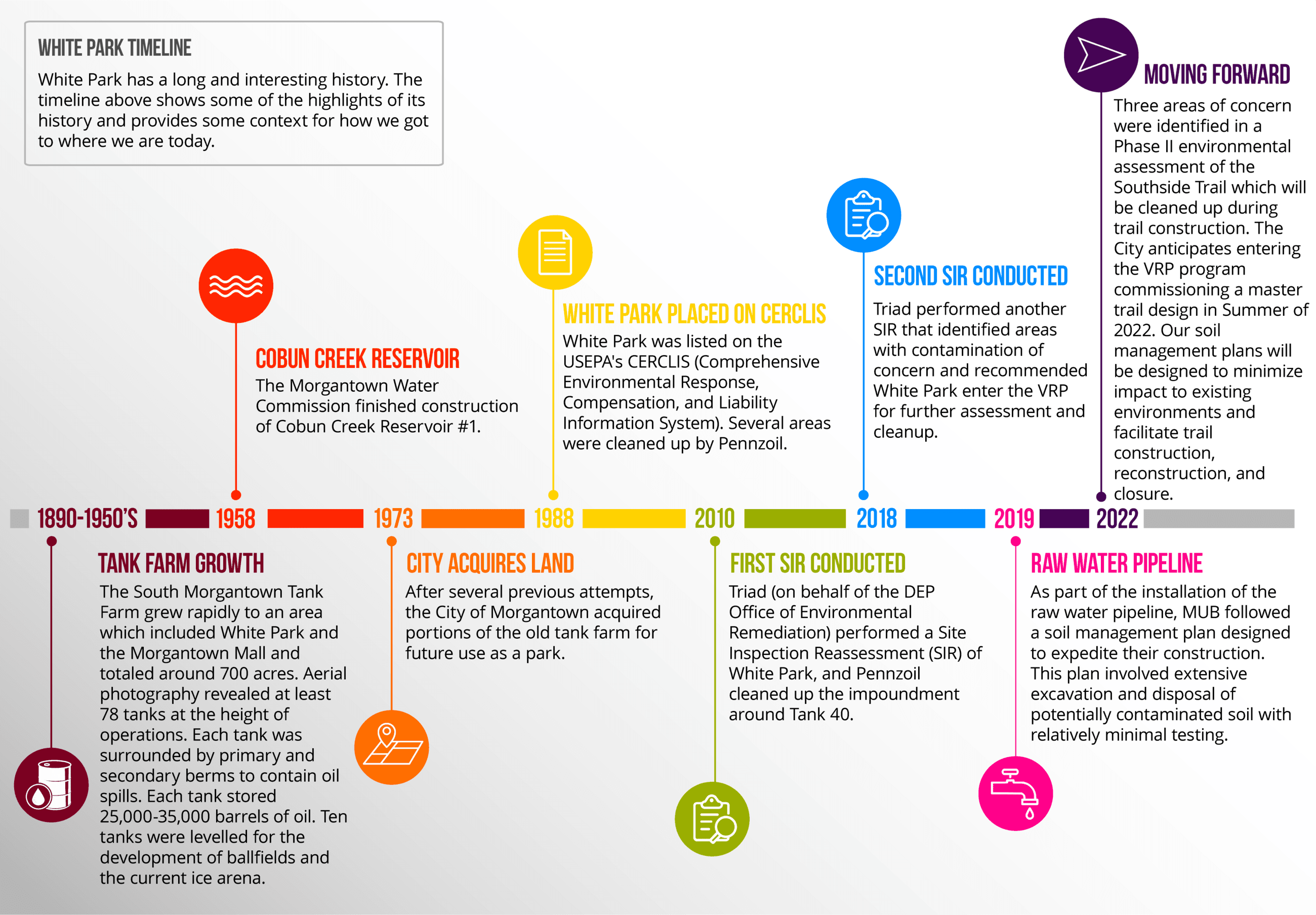